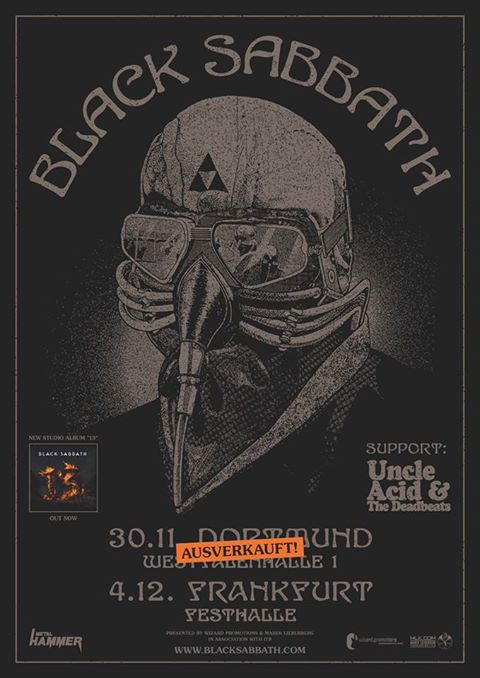 Following the overwhelming response to the initial announcement of just one exclusive concert in Germany at Westfalenhalle in Dortmund which sold out immediately, BLACK SABBATH have now confirmed an additional date in Frankfurt at the Festhalle on Dec 4.

Tickets for the newly announced date will go on general sale starting Friday, June 14 at eventim.de. Tickets are available through all official box offices, the national ticket hotline 01805  570 000 (14 ct./min., mobile prices max 42 ct./min)  or online at www.eventim.de . An exclusive pre-sale through CTS Eventim will start on Wednesday, 12 June am and end on Friday, June 14.

Black Sabbath will kick off their European tour at Hartwall Arena in Finland on November 20th, before taking in Dortmund and Frankfurt followed by a return to where it all began with what is set to be an emotional homecoming show at Birminghams LG Arena on December 20th.

Featuring the original line-up of Ozzy Osbourne, Tony Iommi and Geezer Butler and produced by the multi-Grammy winning Rick Rubin, 13 is the bands first studio album since 1978s Never Say Die. The band were joined at the recording sessions by drummer Brad Wilk (Rage Against The Machine). The album will be released on Vertigo on June 10th.

13 can be pre-ordered now at www.blacksabbath.com or www.amazon.com.