Tony Iommi, Geezer Butler, Bill Ward, Ozzy Osbourne  four names that resonate throughout rocks recorded history as clear and sublime as the bell that tolls the opening to the bands eponymous debut album from 1970. Collectively, they formed Black Sabbath and forged the most haunting and hypnotic rock sound of all time.

Now, one year on from the bands momentous 11.11.11 reunion announcement, The Vinyl Collection: 1970-1978 celebrates the might of the all-conquering original Black Sabbath line-up combining the complete Ozzy-era studio albums re-mastered from the bands personal archives, and encased in a mighty box set package. Beginning with the bands eponymous debut album, the set includes Paranoid, Master of Reality, Volume 4, Sabbath Bloody Sabbath, Sabotage, Technical Ecstasy and Never Say Die, before culminating in the only Black Sabbath live album to feature the legendary original line-up, Live At Last. The 9-LP set features complete reproductions of the original LP album releases including posters and inserts, a hard-backed book containing all of the bands 70s tour programmes, plus a 7 vinyl of debut single Evil Woman and non-album B-side Wicked World. The set is completed by a Back to Black download voucher allowing easy download of the complete box-set contents.

To ensure pristine audio quality for this very special limited edition set, the original master tapes were remastered at a 24-bit/96kHz resolution, giving a listening experience to rival being present at the original Black Sabbath recording sessions. Presented here on heavyweight 180-gram black vinyl, The Vinyl Collection: 1970-1978 is the pinnacle of sonic excellence, bringing the best-sounding Black Sabbath collection ever created without ever overriding the incredible musicianship and atmosphere of the original genre-defining recordings.

From humble beginnings, the Birmingham quartet enslaved the minds and souls of millions of rock fans around the world continuing to this day, where the bands massive influence on modern music cannot be underestimated. Frequently cited as one of the greatest hard rock and metal bands of all time, the musical genre Black Sabbath created has inspired countless musicians and spawned countless bands, all of which have attempted to emulate the heavy metal originators, though few have ever come close to rival their uniquely powerful musical make-up.

With 70 million worldwide album sales under their belts plus a prime place in the Rock And Roll Hall Of Fame, Black Sabbath are now back in the studio, stronger than ever, as they prepare to unleash a brand-new rock behemoth, primed to set alight 2013.

To get ready for this epic aural onslaught, experience the songs that built the legend in the best-ever sounding format with the Black Sabbath Vinyl Collection: 1970-1978.

3. Master of Reality (with poster)

PREORDER YOURS NOW AT http://bit.ly/W2jTGs 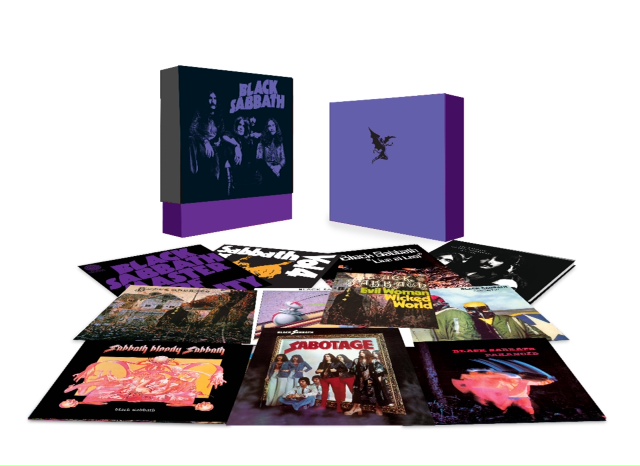